You are here: Home / Women’s Rights / The Legal Rights of Immigrant Women

The following information only applies to permanent residents and not to visitors or persons with temporary visas.

I Am an Immigrant. Do I Have the Same Rights As a Canadian Citizen?

If you are a permanent resident, you have been given legal permission to make Canada your permanent home. Your rights are generally the same as a Canadian citizen. The following are some exceptions:

Note: You need a Permanent Resident (PR) card to prove status and if you travel, you must carry it with you or you cannot re-enter Canada.

Can I Lose My Status as a Permanent Resident (PR)?

You may lose your status as a Permanent Resident if you are convicted of a serious crime or if you leave Canada intending to abandon it as your permanent home. Generally, if you are outside of Canada for more than 730 days (two years) in a five year period, you may lose your residency requirement. It will be assumed that you have abandoned Canada as a permanent home. There are exceptions which include being out of the country with a Canadian citizen or for work, among others. You may have a right to appeal that decision to the Immigration Appeal Division (IAD).
If you are convicted of a serious criminal offence, you will lose your PR status. The Immigration Department will issue a removal order against you and only in some cases can that order be appealed. If you cannot appeal or if you lose an appeal, you will likely be removed from Canada.

Can I Be Ordered to Leave Canada?

No matter how long you have resided in Canada as a permanent resident, under the Immigration and Refugee Protection Act (IRPA) you may be ordered to leave Canada permanently (i.e., deported). You may be deported for several reasons including:

If an officer of the Department of Immigration and Refugee Protection is of the opinion that a permanent resident should be deported, he/she may prepare a report for the Minister. If the Minister of Immigration and Refugee Protection feels the opinion in the report is well-founded, he/she may direct the matter to the Immigration division for a hearing in the matter to find out whether you should be deported. You should be given the chance to present your case and to be represented by a lawyer if you want one.
Right to Appeal: You may appeal the decision reached by an officer of the Immigration Division, if you apply within the time required and meet the conditions for appeal. You are entitled to a fair hearing and the opportunity to give oral evidence on any review of a decision to deport you. The basic rights and freedoms available to Canadian citizens are also available to anyone under the jurisdiction of Canadian law. However, as a Permanent Resident you lose your right to appeal a deportation order if you are sentenced to a term of imprisonment of at least two years.

How Can I Sponsor My Relatives to Come to Canada?

Every Canadian citizen and every permanent resident who is living in Canada and is at least eighteen years old may sponsor certain relatives to immigrate to Canada. These relatives may apply for admission in a category called “members of the family class.” Relatives included in the family class who may be sponsored are:

A sponsor must sign a Sponsorship Agreement promising to provide the new immigrant with basic personal needs, such as food, clothing, housing and maintenance, for a period that is determined by regulation. The application for sponsorship can be refused if Immigration officials think that the sponsor will not be financially capable of fulfilling the promise. The federal or provincial government may also ask the sponsor to pay back all or part of any financial help that the government must give, if the sponsor does not provide for the immigrant. In order to sponsor a family member, ask your Canada Immigration Centre for a sponsorship application kit. There is a non-refundable processing fee for applying.

The AINP is an immigration program operated by the Province of Alberta (the Ministry of Employment and Immigration) in conjunction with the federal department of Citizenship and Immigration Canada (CIC). Individuals nominated by the Government of Alberta, together with their spouse or common-law partner and dependent children, can apply for a permanent resident visa through CIC as a Provincial Nominee. CIC makes final decisions on all Provincial Nominee permanent resident applications.
The AINP is a program for permanent residence. AINP nominations will not be issued for the purpose of obtaining temporary work permit extensions. At the time of printing this booklet, the AINP is not accepting applications postmarked after August 23, 2010 for the US Visa holder or Family Stream categories. Only Employer-Driven, Strategic Recruitment, and Self-Employed Farmer Stream categories are taking applications. However, this is subject to change so check the website for the most up-to-date information: www.albertacanada.com/immigration/
Application forms may be found here as well or call 310-0000 to have the forms mailed to you.

What Other Ways Can I Assist Friends or Relatives to Come to Canada?

Besides being sponsored as a member of the family class, relatives or friends can also apply for admission to Canada in the category of: Convention Refugees, retired persons, assisted relatives, self-employed persons, skilled workers, or general applicants. Of course, they must meet the required qualifications of each category. Each of the categories of applicants to Canada has its own qualifications and rules for admission. You may obtain information on the requirements for immigration to Canada from your local office of Citizenship and Immigration Canada or at an immigrant aid society.

Is There a Cost for Immigrating to Canada?

The Right of Permanent Residence Fee (RPRF), formerly called the Right of Landing Fee, is $490. The fee applies to each of the applicants as well as a spouse or common-law partner. It must be paid before the immigrant visa is issued overseas or before the applicant becomes a permanent resident in Canada.
Exemption: Dependent children and Protected Persons including Convention Refugees are exempt from paying the RPRF.
Note: The Right of Permanent Residence Fee (which is paid to the government) should not be confused with processing fees ($550) for immigration services.

How Do I Apply For Canadian Citizenship? 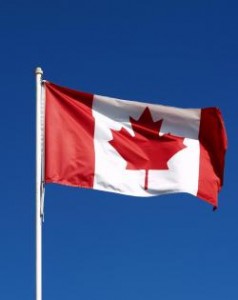 You may apply for Canadian citizenship if:

You may get application forms and other information by calling Citizenship and Immigration Canada (see listing under Government of Canada in the blue pages of the phone book, or online: www.cic.gc.ca). Along with the application form, you will be required to supply:

You will appear in Citizenship Court when your application is decided. If you qualify and citizenship is granted, you will take an oath of allegiance to Canada. An application takes approximately nine to eighteen months to process.